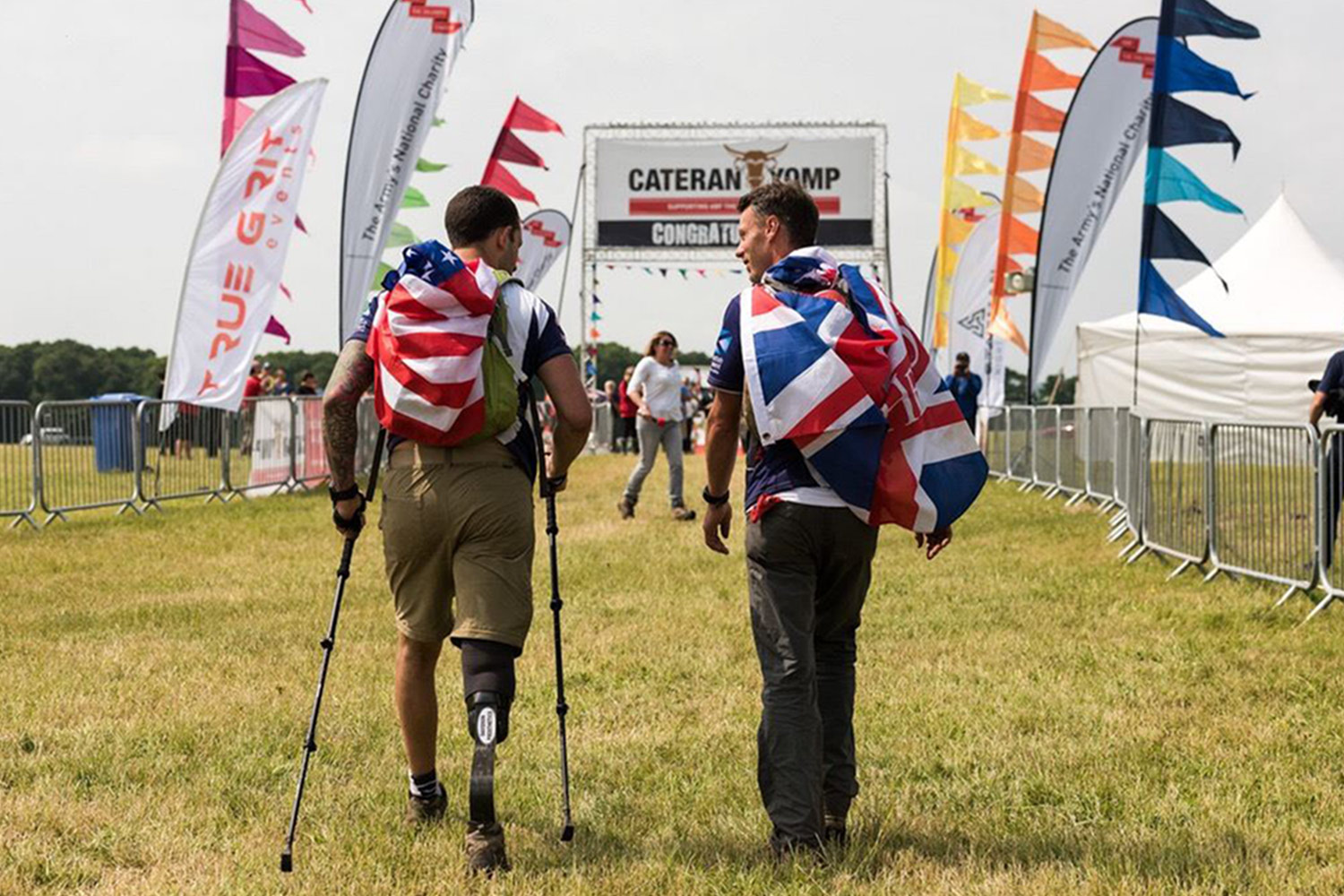 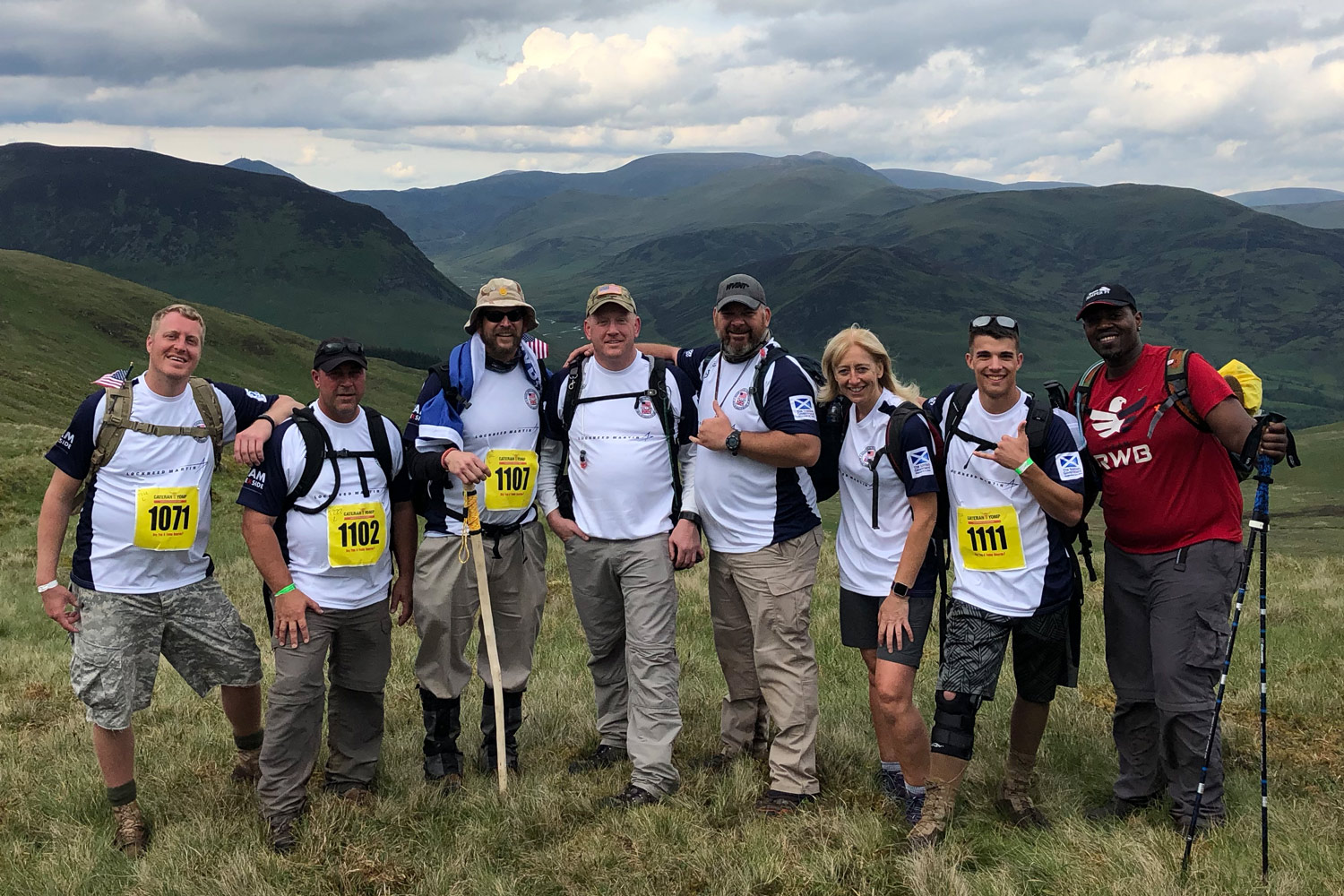 Fellowship and unity are the foundation to healing.

Allied Forces Foundation will be represented at AUSA this year at Booth 7965. Will be attending the Military Family Forums. Link below

Please come along to meet the team and learn about our programs for 2020.

We are looking for warriors to support our events and take part in the challenges:

Justin Rowe finished the run on Saturday 14th September at the USMC Memorial, Arlington Virginia.
It was humbling experience finishing at such an iconic memorial with my family, USMC Guard of Honor from Marine Corps Base Quantico (MCBQ), Arlington Police, Fire, USMC Commander MCBQ, and Royal Marine Commando senior officers to meet me at the finish.
The memory will stay with me forever, especially running the last 10 miles with a good friend and CEO of Allied Forces Foundation, Stuart Taylor.
Justin completed the run in 44 days running a distance of 990.44 miles pulling a trailer (Burley Nomad) weighing 35 kgs / 77Ibs, averaging 22.5 miles a day. Every day I was getting mentally and physically stronger, he could have run another 1.000 miles but I had to return home back with my family.
He has raised $8.000 for the foundation so far, this will help the volunteers carry out their important work of supporting injured allied veterans side by side to take part in physical challenges such as the USMC Marathon, the Cateran Yomp in the highlands of Scotland and supporting veterans with PTS.
Finally, Justin would like to thank the sponsors Providence UK and Burley USA, he wishes you all the health, happiness and success for the future hopefully our paths will cross again in the not too distant future.
Please support: https://www.firstgiving.com/fundraiser/justin-rowe/run2dc
Video of Justin Speaking to WUSA news:
https://www.wusa9.com/article/news/local/police-officers-struggle-with-suicide/65-56b3fb32-84b2-4d37-b817-4e9ca422b824

Justin Rowe is on his way and started the 1000 miles run pulling his equipment and supplies in a trailer. 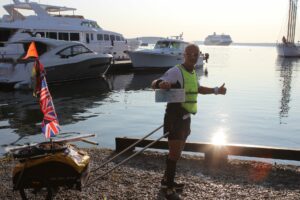 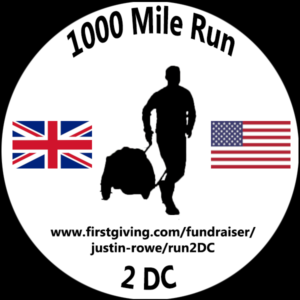 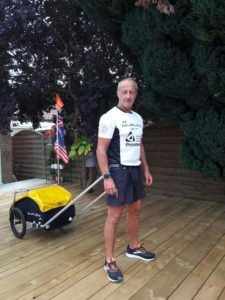 Today, at London Health Culture Change, AFF’s President and Chief Executive Officer, Stuart Taylor, will be talking on a panel to explore the opportunity that adaptive sports programs, challenge events and other non-traditional approaches create for post traumatic growth for those who have experienced trauma and loss.  Other speakers on the panel include;

The 2nd Global Summit on Mental Health Culture Change in London builds on the tremendous success of Give an Hour and its Campaign to Change Direction’s first Global Summit held in Los Angeles in May 2017. Give an Hour, in collaboration with other international partners, brings this exciting gathering to London.   The Global Summit is showcasing organizations that are using groundbreaking ways they and the attendees are removing cultural biases that affect how we think about, talk about and address emotional well-being and mental health.

thebigword skydive team, led by Director and Head of Corporate Social Responsibility, Michele Gould, will be travelling to Yorkshire’s East Coast on Sunday, September 2, 2018 to skydive in support of the Allied Forces Foundation.

thebigword is a company that provides language services for the public and private sectors since 1980, and is a global provider of translation and interpreting in over 250 languages.

If you would like to donate to their fundraising efforts, visit FirstGiving

Having an absolutely wonderful day at Oatlands Plantation! If you’re in the area today and/or tomorrow, please stop by. From the Front Lines to the Home Front: Oatlands and World War I & World War II, Today until 5 pm. Sunday, July 15 – 10 a.m. to 3 p.m. #oatlandsplantation

Listen to a recap of the Ukraine Team talking about their experience with Allied Forces Foundation at the Cateran Yomp and their upcoming participation in the Marine Corps Marathon.

The final piece, a wrap up and thank you to those who made this possible! Thank you to all from every level and angle, it was incredible and unforgettable! Fingers crossed I am blessed to do this again and honored enough to share the next journey with some new faces!